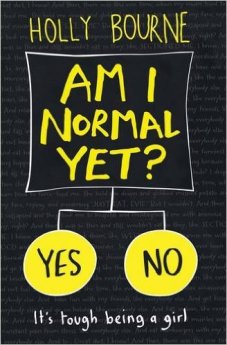 Am I Normal Yet? Holly Bourne. Usborne Publishing Ltd. August 2015.

All Evie wants is to be normal. And now that she’s almost off her meds and at a new college where no one knows her as the-girl-who-went-nuts, there’s only one thing left to tick off her list… But relationships can mess with anyone’s head – something Evie’s new friends Amber and Lottie know only too well. The trouble is, if Evie won’t tell them her secrets, how can they stop her making a huge mistake?

Am I Normal Yet? by Holly Bourne was an incredible book, and I loved it so much I’m almost scared to review it because I feel like nothing I write (even if I cram every word meaning flipping marvellous listed in my Thesaurus into one sentence) will do it the justice it deserves. I’ve just downloaded all of Holly’s other books, because if they’re anywhere near as good as this one, I need them in my life right now, thank you please.

This story is narrated by Evie, who has just started college, and is desperately seeking ‘normal’, whilst in tentative recovery from a severe episode of Obsessive Compulsive Disorder and Generalised Anxiety Disorder. Evie’s determined to make new friends, date boys like everyone else her age seems to be doing, and start experiencing some ‘Firsts’,  but all the while, in the forefront of her mind, is the fear that everyone will eventually come to realise she isn’t ‘normal’, and when they do, they won’t want to know her anymore.

I’ll admit to begin with that I haven’t read all that many books about mental illness, and I didn’t know a lot about OCD before I opened this book, beyond some of the habits and behaviours it can manifest in. However, out of all the books I have read which explore mental health issues, this felt to me the most realistic and sensitively written. I’ve never experienced anything like the thoughts and feelings Evie struggles with daily, but I felt this book took me completely inside her head, and really opened my eyes to the infinite ways in which this debilitating illness affects every facet of your life. Evie’s form of OCD is what she describes as ‘the clichéd one’ – she is terrified of germs and becoming sick. I was of course aware of this type of OCD, but I’m ashamed to admit I’d only ever considered the hand-washing aspect – I’d never truly thought about how many everyday things it can prevent you from doing – going to public places, eating food prepared by others, even (especially) having physical contact with another person.

Evie was such a compassionately drawn character, and I really felt I went on a journey with her. However, Evie is so much more than the illness she’s recovering from, and I absolutely fell in love with her personality and distinctive narrative voice. Evie is strong (though she doesn’t see it yet), smart, and her wit and lightening-quick comebacks made me laugh out loud. I knew Evie and I were going to get along, as soon as she mentioned having a ‘mini-sick’ in her throat watching her friend Jane nauseatingly suck face with her new boyfriend Joel. I so relate.

Evie and her new friends Amber and Lottie were my favourite thing about ‘Am I Normal Yet?’. I love, love, loved the fact that strong female friendship was the absolute foundation of this book. There is some romance in this story, but Evie and her friends take centre stage, and I thought they were brilliant (and hilarious) together. Whilst I was reading, I remembered some of the unfunny Lad-Bible type ‘jokes’ I’ve encountered in the past about how ‘girls can’t do banter’…  this book totally blows that ridiculous sentiment out of the water.  Also the subtle prank Amber and Lottie pull on a certain somebody towards the end of the story is the most epic thing, and when I read it, I was like HA! YES! SLAAAAY! (in that order).

I loved everything about this novel, but the thing that really got me to my core, was the importance (rightly) given to feminism, and the way feminist ideas are explored by Evie and her friends. The girls form a group to discuss feminist issues (with breaks for ‘cheesy snacks’, courtesy of Amber’s uber-organised meeting agendas!)

They call this group ‘The Spinster Club’, deciding to reclaim the word ‘Spinster’ – instead of meaning unmarriageable older woman, it now means this:

I thought this was a fantastic idea, and (as you can be all of the above at the same time as being in a healthy, loving relationship with a man) I will proudly proclaim that I, too, am a Spinster!

I ended up underlining a fair amount of Spinstery goodness whilst reading this book, including the girls’ frank discussion about periods (why is society so afraid and embarrassed to admit that 50% of the population bleed every month, when it’s totally bloody normal?!), and their conversation about the ‘Manic Pixie Dream Girl’ trope in books and films, and how it’s created a totally unrealistic picture (shimmering-mirage, if you will) of what a girl is or ever will be. I was nodding at everything I read, and I cannot explain enough how much I want to start my own Spinster club.

This is a hugely important book – awareness raising, stigma busting, and phenomenally well-written. What resonated most, in the end, was that the ‘normal’ Evie chases is shown to be a total myth – people cope with the world in a thousand different ways, so how can we ever define what’s ‘normal’? Parts of this novel made me cry, and parts made me snort with laughter. Overall, I closed the book with genuine mega-warm-fuzzy-feelings (yes, I am capable of those, despite being such a wallow-in-the-darkness type of reader), because the characters and the friendships between them are so powerful and fabulously drawn.

YOU MUST READ THIS BOOK. RIGHT NOW.

View all posts by mudandstars

5 thoughts on “The importance of feminism, epic friendship and accepting that there is no ‘Normal’… My review of Holly Bourne’s ‘Am I Normal Yet?’”

What am I reading?